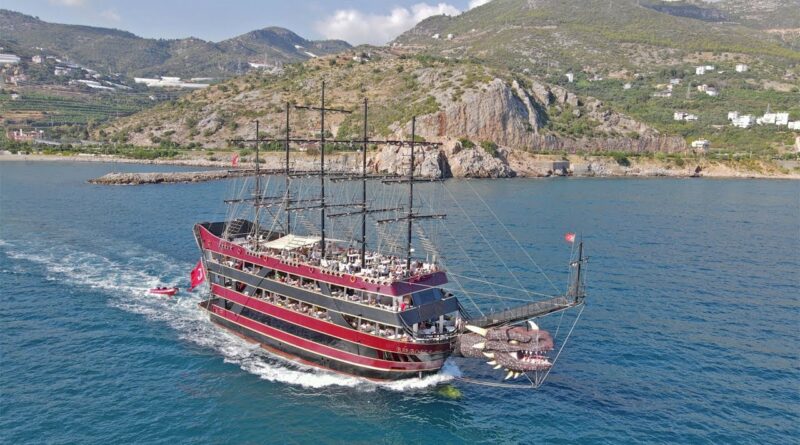 We arrived on our sailboat in Alanya this summer and moored in the Alanya Marina. This is where lots of pirate boats come for a day trip, or stay for a rest overnight before they take out new holidayers. We went on one of the biggest pirate ships here in Alanya, Turkey, called Barbossa. If you like, you can just watch the video and you’ll know exactly what it was like, or keep reading and we’ll tell you the details!

We arrived onto the Barbossa at 9:30 that morning, the ship leaves the marina at 10. When boarding, immediately we passed by the ship’s parrot. Every guest on board gets an opportunity to take a photo with this beautiful bird. Later on during the trip, these photos can be purchased as souvenirs. You can also get facepainted as a real pirate, and you can buy a sword or shield to play with all the other kids on board.

Once this was all sorted, we set sail from the marina, towards the impressive cliffs upon which the Alanya Castle was built. The anchor was dropped right in front of the cliffs so we all had an opportunity to take a refreshing swim. Of course during the sail over, pirate Alex was keeping us all entertained with loud but very danceable music and some games.

After about half an hour, swimming time was over and we continued towards the old Alanya Marina, where we anchored once again. Here we enjoyed a nice self serve lunch, with lots of different options. The food choice was plentiful, and most of it was really quite tasty. Of course we also really enjoyed the free drinks that were provided throughout the trip, including water, soft drinks, beer and wine!

Once lunch was had we set off once again to sail very near to the cliffs of the Alanya castle, where pirate Alex put on a great show. He jumped in the water, climbed up on the cliffs, and on the other side, re-appeared with a treasure, which he brought back to the boat safely. He jumped of a good height straight into the water which was a good show. Guess what, the treasure was filled with sweets for all kids to enjoy!

From the Alanya Castle we continued to one more really nice bay near the other Alanya Marina, where we swam once again. Then on the way back to the marina, a huge foam party got going. Everyone smelt like roses (or foam) once they had been through that party, which of course was paired with some fun dance tracks as well.

Around 3 pm we arrived back at the marina, having had a great time, some beautiful views of the castle and city of Alanya, very nice swimming, and a good lunch to go with it. For 25 euro’s a person, and free for the kids, this was a great deal that we highly recommend! 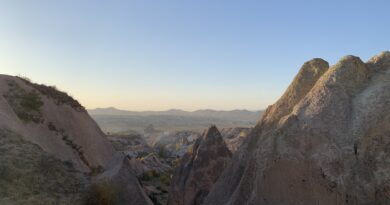 10 Things To Do In Cappadocia

Things to do on a short layover in Addis Ababa, Ethiopia 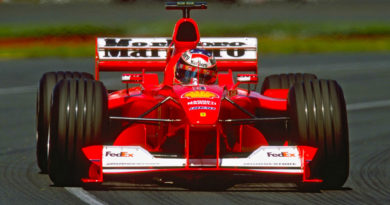